History of The Flying Dragon

During the initial exploration of this property in February, 2012, we noticed a large and frightful bush.  The season was mid-winter and the bush was without leaf, but this condition only heightened and highlighted the beautiful repetitive form of bright green finger and nail, jawbone and tooth.  Curiosity compelled us to discover that this bush was actually a variety of orange tree, originally from china or possibly korea, and that a particular variety of this bush is called "Flying Dragon".  How could one choose any other name for a flying disc arena which is guarded by so fierce a protector?  Please  show our hostess due respect and perhaps you may yourself avoid falling headlong into her inescapable grasp! 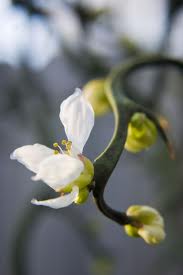 The flying dragon is not readily appreciated but has a lot of potential.  It's small, full of seeds and sour, but with a great, unique taste.  It is very easily recognized by the huge claws coming out from the plant in all directions.  It often resembles a brambly bush unless the owner has taken care of it.  Supposedly, it's used as a form of natural barbed wire.  The fruit looks like a bright, yellow golf ball and has a great cirtus-pine smell to it.
Pictures
Once upon a time a band of brave adventurers set forth to blaze a path through this wild wood, forsaking comfort and caution to win glory and honor. The entrepid band was hindered in their labors by a vicious-looking bush, whose bright green thorns tore their arms like talons and serpentine vines tangled about their legs. 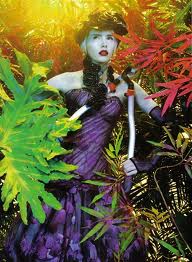 Hacking their way through the brush, they suddenly stumbled into a clearing, where they came face-to-face with a small emerald green dragon.  She was perched upon her nest, weeping. So lovely was she that, though overcome with fear, the leader of the band stepped forward and begged her to tell them of her woe. "Many a nest have I made in this wood," she cried," but ere I may rest in them, the thorns overgrow them and I am forced to move on. Once I was a flying dragon, but the vines grow too tightly, like a net o'er my head. I am cursed to wander here, with none to save me."

Moved by the gentle dragon's plight, the adventurers told the dragon of their quest and vowed to free her from the curse. "We will lead you to the forest edge when the way is clear," they said,"so you may soar the skies as of old."
The little dragon was overwhelmed with gratitude. "As a reward for your kindness, I will grant you a treasure beyond measure. In this nest I have laid an emerald egg; seventeen more have I lain in this wood. When you find them, take the eggs, but leave the nests in remembrance of me."
The adventurers did as the dragon bid, and when the way was clear, they led her through the forest to the open air. As she soared into the sky, her curse broken, the flying dragon spoke an enchantment over the wood.
"Though it may twist and turn, though it may prick and scrape, whether straight or sundered runs the course, my friends, keep thy way true. May the thorns that once imprisoned me be a guide toward home for you."